Often in data competitions, participants are given only a dataset and are encouraged to try to make predictions or carry out an analysis. In a real organization, doing data science also involves challenges beyond analyzing the data we are given. In this blog post, I will describe obstacles I faced when I tried to forecast a computer lab’s desktop usage.

I am part of the volunteer staff for the Open Computing Facility (OCF) at the University of California, Berkeley, where we provide free computer access to all students.

One project I worked on was to forecast our desktop usage (which I defined as the number of computers in use every minute during open hours) so students looking for a desktop can have an basic idea when the lab is busy.

Ideally we want a data table that shows the number of desktops in use each minute. Instead, we have data for each desktop login session. Below is a snippet of the session database. Each row represents a user’s session. We have the times they logged in and out of the computer, and the “host” field identifies the name of the desktop.

We have code to compute desktop usage from the session data. I ran this code and made a lab utilization graph (see figure below). This graph uncovered a problem with the data. 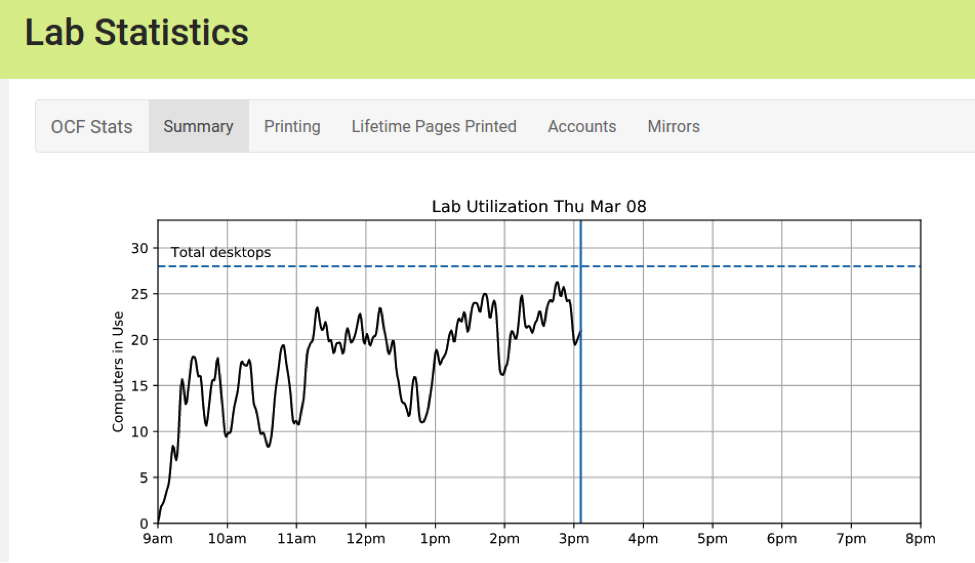 Challenge 2: The data is not accurate.

I asked a senior volunteer lab staff member how the data was generated. He directed me to the corresponding place in the OCF codebase and told me the session data was not accurate: all the sessions’ start times were mysteriously starting on the first 2 seconds of any minute (check figure below). The data had this oddity for several few months. 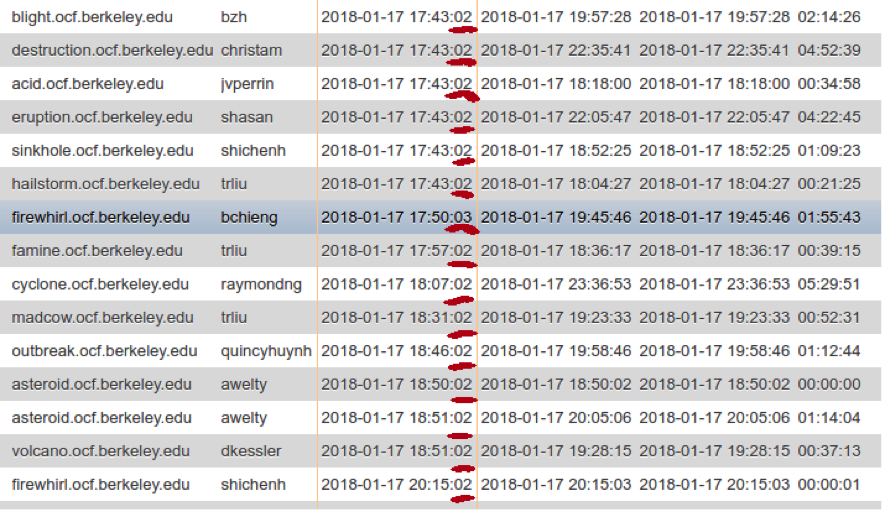 See most of the sessions start at “02.” and the first few session start at the exact same time, which is highly unlikely.

I also found that the total number of desktops in the graph was wrong: the system was counting a desktop that was no longer in use. This time, our site manager corrected the corresponding records in our system. But still the utilization graph didn’t jibe with my experience in the lab.

Challenge 3: There is a limitation to what data can show you.

It wasn’t until I worked on another project that I the reasons for why the utilization graph was not “right.” My new project was to dynamically display the number of desktops available on the lab TV screen so that a user waiting in line can know in real time whether a desktop is available (see screenshot below).

One afternoon when the lab was full, the TV showed that the number of desktop available was, once again, not 0. So I walked around the lab and realized there were a few people occupying a desktop station who hadn’t logged into the desktop. Some of them did work on their laptops, and others were creating an OCF account to be able to log into a desktop. In short, we often have full lab utilization (all stations occupied) but not desktop utilization (all desktops in use).

Here are some things I learned while working with data in a relatively small organization: